“The possibility of a relational art (an art taking as its theoretical horizon the realm of human interactions and its social context, rather than the assertion of an independent and private symbolic space), points to a radical upheaval of the aesthetic, cultural and political goals introduced by modern art.” (14)

“In other words, it is no longer possible to regard the contemporary work as a space to be walked through […]. It is henceforth presented as a period of time to be lived through, like an opening of a conversation.” (15)

“So the artist sets his sights more and more clearly on the relations that his work will create among his public, and on the invention of models of sociability.” (28)

“Every artist whose work stems from relational aesthetics has a world of forms, a set of problems and a trajectory which are all his own. They are not connected together by any style, theme or iconography. What they do share is much more decisive, to wit, the fact of operating within one and the same practical and theoretical horizon: the sphere of inter-human relations.” (43) 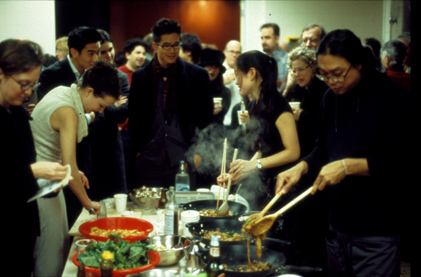 Art as a set of practices which take as their theoretical and practical point of departure the whole of human relations and their social context: the manifesto that has renewed the approach of contemporary art since the 1990s.

Where does our current obsession for interactivity stem from? After the consumer society and the communication era, does art still contribute to the emergence of a rational society? Nicolas Bourriaud attempts to renew our approach towards contemporary art by getting as close as possible to the artists’ works, and by revealing the principles that structure their thoughts: an aesthetic of the inter-human, of the encounter; of proximity, of resisting social formatting. The aim of his essay is to produce the tools to enable us to understand the evolution of today’s art. We meet Felix Gonzalez-Torres, Louis Althusser, Rirkrit Tiravanija or Félix Guattari, along with most of today’s practising creative personalities.

Nicolas Bourriaud is born in 1965. Art critic and exhibition curator, he lives in London, where he is currently Gulbenkian Curator for Contemporary Art at Tate Britain. He was co-founder and co-director of the Palais de Tokyo in Paris (2000-2006). He has presented exhibitions in art centres in France – CCC in Tours, Crac in Sète, etc. – and abroad: Fri Art in Fribourg, San Francisco Art Institute and elsewhere. He was cofounder of the reviews Documents sur l’art (1992-2000) and Perpendiculaire (1995-1998).

In “Antagonism and Relational Aesthetics”, published in 2004 in October, Claire Bishop describes the aesthetic of Palais de Tokyo as a “laboratory”, the “curatorial modus operandi” of art produced in the 1990s. Bishop writes, “An effect of this insistent promotion of these ideas as artists-as-designer, function over contemplation, and open-endedness over aesthetic resolution is often ultimately to enhance the status of the curator, who gains credit for stage-managing the overall laboratory experi- ence. As Hal Foster warned in the mid-1990s, “the institution may overshadow the work that it otherwise highlights: it becomes the spectacle, it collects the cultural capital, and the director-curator becomes the star.” Bishop identifies Bourriaud’s book as an important first step in identifying tendencies in the art of the 1990s. However, Bishop, also asks “if relational art produces human relations, then the next logical question to ask is what types of relations are being produced, for whom, and why?” She continues that “the relations set up by relational aesthetics are not intrinsically democratic, as Bourriaud suggests, since they rest too comfortably within an ideal of subjectivity as whole and of community as immanent togetherness.”