“We must talk with so-called victims of a crisis as people, not as statistics or victims. We need to talk to them as equals who have abilities and who want to contribute. Essentially, they don’t want hand-outs, they want to be masters of their own lives.”

“We need to make people people again, we need to give them the opportunity to not spend 90% of their time collecting water and food.”

“As a world community we need to learn to deal with crises that currently overwhelm us. We live in a world, on a globe, and we can’t stand by and watch as the majority of the world population is excluded. This is also a big topic in the field of migration and escape: How can we distribute resources more equally?”

“We must distance ourselves from a victim and charity focused mindset. I remember first suggesting that people pay for electricity and water at the Zaatari camp. The aid agencies looked stunned. “No, these are refugees, we can’t ask them to pay for that.” And that’s just the point. Is there anything more humane than making people pay and be responsible for what they use and need in this world?”

Kilian Kleinschmidt worked as a UN aid worker for several decades. He was stationed in Sri Lanka, Kosovo, Somalia, the Democratic Republic of the Congo, Kenya and in South Sudan. He gained fame as the so-called “mayor of Saatari”. Kleinschmidt lead the largest Syrian refugee camp in Jordan.

He resigned from the UN half a year ago, and now has his own company, in which he wishes to combine private industry with development aid.

How can refugees be helped? Why does development aid rob people of their dignity? And how can helpers help themselves?

Susanne Führer discusses these questions with Kilian Kleinschmidt in the programme Im Gespräch on April 30th 2015 between 9.07 am and 10 am on the radio programme “Deutschlandradio Kultur: 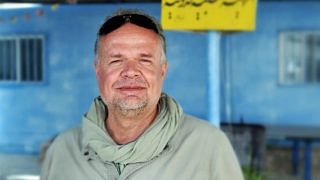 Article about the “Zaatari refugee camp: Rebuilding lives in the desert” by BBC News Middle East

Kilian Kleinschmidt, who oversees the camp for the UN much like a mayor, says running a temporary city of 25,000 households is “an amazingly complex job”.

Providing food, water, shelter and healthcare to thousands of people every day is a challenge, but it is important that people are given back their dignity and offered a future, he says.

“Everybody here is traumatised to a certain extent. There are too many families where an entire generation has been wiped out.”