From Bogdan Wojciszke The average one do not use big words. They do not blow their own trumpets. They do not self-advertise and they are rather sceptical about consumption as a life goal, considering such a goal unattainable. They live modest lives, probably honest lives. They care for the good of their loved ones rather than their own. Their lives are about it rather than their talking. Probably because living is just more important than talk. 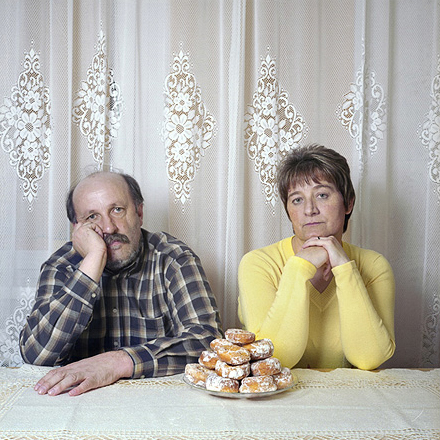 “I’m the sixth one, the last of the sisters. Kind of gone awry”, says Beata describing herself. She used to train long jump, shot put and 100-metre dash, then she became a PE teacher. When after a kidney transplant she couldn’t train anymore, she switched to working in the school library. Jerzy, also a PE teacher, used to work in the same school but lost his job; he now works casually. they live with their 16-year-old daughter in a studio flat in a “Teacher’s House” run by the school. “Our daughter Florntyna was born on the 16th of October, the anniversary of the Pope’s election. I thought I couldn’t have children, as I’d had one ovary removed and the other one was blocked. It was a miracle that it all came off well. It’s all in the hands of God. I kept her at my own responsibility, the doctors wanted to terminate the pregnancy. Visiting the dialysis unit, I was in a very bed state. And she was so tiny. “God let me live to see her confirmation”, I prayed. And thanks to this prayer I’ve lived so many years…” “I’m sure our daughter is not going to be a PE teacher”, says Jerzy. “We’re both so much into sports, while she’s regrettably quite skill-less. She can’t even do a tumble. But she’s smart, she’ll do well in life. She’ll get beyond average.”